Yann Perreau is pleased to announce the opening of “Here is Elsewhere” gallery as part of “Design Loves Art” at Pacific Design Center, Los Angeles. 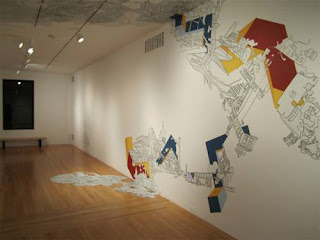 First Show "Venice from then to now" - November 19th - January 15th
Opening Reception Thursday, November 18th, 5-8:30 pm
Yann Perreau is pleased to announce the opening of “Here is Elsewhere” gallery
as part of “Design Loves Art” at Pacific Design Center, Los Angeles.
“Here is Elsewhere” is a project space dedicated to exploring the hidden history that links
artists from “Here” -So Cal- with artists from “Elsewhere”.
“Venice artists from then to now”, the first exhibition at the gallery, will open on
November 18th at 5 pm.
This group show will explore Venice Beach’s rich and radical art scene, from the 1960’s until now. When the Ferus Gallery opened,
Venice was an affordable paradise for a community of artists, dealers, homeless,
rock stars and Beat poets.
This is the place where key figures of the Southern
California art scene met to create their most experimental works. “I wouldn’t
live anywhere else” explains Larry Bell who returned to his original studio on
Pacific Avenue recently after years in Tao, New Mexico.
Forty years after its pioneer time, Venice is now often seen as passé or cliché. It would have become gentrified, some kind of a touristic resort. It would have lost its soul.
This exhibition intends to show how the town by the ocean still possesses, just
as it used to do, a rich and creative art community. Sometimes using new forms
of expressions (video, graffiti) a young generation of artists is emerging.
They are creating a new vision while following the steps, more or less consciously,
of their great predecessors. How Venice artists have become over the years
an iconic community? What are the links between this past and that present?
Inspired by Walter Benjamin’s historical method of “the tiger's leap into the past”
this show raises these questions. It features works from some of those who have
contributed to the birth of Venice as a “maverick” art scene (Larry Bell, Huguette
Caland, Laddie John Dill, Elsa Rady), emerging artists from the new generation
(N.Agyapong, James Mathers, Jules Muck, Ace Norton, Kim Schoenstadt, Emily
Smith, Samantha Thomas) and outsiders (Marc Valesella, Dominique Moody)
whose point of view reflects Venice’s image as a double-standard mirror.
Plus special performance and guests to be announced.
For more information, please contact Elsy Benitez:
ebenitez@hereiselsewhere.com
HiE @ B 231 Space, Pacific Design Center –
8687 Melrose Ave # G102- Blue Building, Second Floor, West Hollywood, CA
90069.
www.hereiselsewhere.com;
Special thanks to Heather Harmon.
Directions to the Pacific Design Center
Pacific Design Center is located on the northeast corner of San Vicente
Boulevard and Melrose Avenue in the heart of West Hollywood, one mile east of
Beverly Hills.
Due to construction the San Vicente Boulevard parking is closed.
All access to the parking garage is now through the Melrose Avenue entrance
located between San Vicente Boulevard and Huntley Drive on the North side of
the street.
Here is Elsewhere Gallery is located on the second floor of the blue
building (space B 231).
www.pacificdesigncenter.com/#/design-loves-art/ Self
and valet parking @ PDC.
Complementary parking for press (310) 360 6404.
Facebook:
http://www.facebook.com/pages/West-Hollywood-CA/Here-is-Elsewhere-Gallery/
168065319872954?v=wall&ref=ts
Twitter:
http://twitter.com/#!/hereiselsewhere
Here is Elsewhere
Pacific Design Center
8687 Melrose Ave, Suite B231
Blue Building, Second Floor
West Hollywood, CA 90069
Hours: Tue thru Fri 12 - 5PM
and select Saturdays
info@hereiselsewhere.com
Publié par David Martinon à l'adresse 3:06 PM